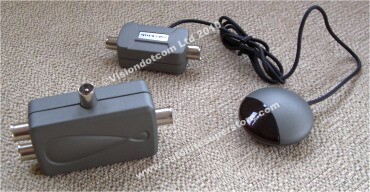 Triax Trilink. Wired control
for all receivers without a UHF output

If you are buying a freesat receiver or a non Sky receiver without a UHF outlet, you will need this kit if
you want to distribute TV around the house with control in each room. (Cabling is needed).
The built in modulator converts the scart output of your receiver to UHF and the internal link is
a special TV eye system for non Sky receivers so that your handset has control in other rooms.
No freesat receiver has this built in and so it is an ideal addition. The UHF output can feed
an existing UHF distribution amplifier if watching TV in several rooms with control is required.
A TV eye is included but additional TV eyes can be added. Click here to order.

It is well worth a visit.
Only The Satellite Superstore brings you great products,
advice and it's own MUSEUM


(All prices on this web site include VAT.)